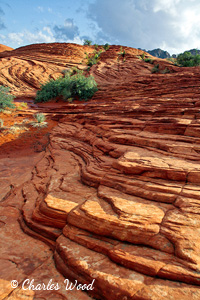 Located in the 62,000 acre Red Cliffs Desert Reserve, established to protect the federally listed desert tortoise and its habitat, the park offers opportunities for outdoor enthusiasts of all ages. Activities include hiking, nature studies, wildlife viewing, photography, camping, ranger talks and junior ranger programs. There are more than 18 miles of hiking trails, a three-mile paved walking/biking trail and over five miles of equestrian trails.

Transported by wind more than 183 million years ago, tiny grains of quartzite sand covered much of what we now call Utah. These sand dunes, up to 2,500 feet thick, eventually were cemented into stone. Burnt orange to creamy white in color, Navajo sandstone, the predominant rock in the park, is what remains of the ancient desert sand sea. Over time, water has cut and shaped the sandstone to form canyons. Approximately 2.5 million years ago, and as recently as 20,000 years ago, nearby cinder cones erupted, causing lava to flow down these canyons, filling them with basalt. This redirected ancient waterways, eventually carving new canyons. Look up to see lava-capped ridges that were once canyon bottoms. Removal of rocks and minerals is prohibited.

Snow Canyon is home to a diversity of plant and wildlife species not occurring elsewhere in the state. Located at the intersection of the Mojave Desert, Great Basin Desert and Colorado Plateau, the park averages 7.5 inches of rainfall a year. Vegetation includes desert adapted species such as creosote bush, narrow leaf yucca, sand sage, blackbrush, scrub oak and desert willow. If spring and fall conditions are right, wildflowers light up the park with a showy display of blooms. Wildlife watchers may see coyotes, kit foxes, quail, roadrunners, leopard lizards, gopher snakes and canyon tree frogs. Thirteen sensitive species protected by state and/or federal law are found within the park. They include peregrine falcons, desert tortoises and gila monsters. Plant and wildlife checklists are available at the park headquarters for a nominal fee. Removal of plants and wildlife is prohibited.

Park History
Created in 1958, Snow Canyon has a long history of human use. Anasazi Indians inhabited the region from A.D. 200 to 1250, utilizing the canyon for hunting and gathering. Paiute Indians used the canyon from A.D. 1200 to the mid-1800s. Mormon pioneers discovered Snow Canyon in the 1850’s while searching for lost cattle. Modern-day the canyon has been the site of Hollywood films such as Butch Cassidy and the Sundance Kid, The Electric Horseman, and Jeremiah Johnson. Originally called Dixie State Park, it was later renamed for Lorenzo and Erastus Snow, prominent pioneering Utah leaders. Opened to the public as a state park in 1962.